I wanna brag a little. Ok, may be a little more than just a little.

Her Majesty Queen Elizabeth II turned the big 9-0 this year, so a big “Happy Belated Birthday” to her because her real birthday was in April. It will be a public holiday here in Australia for the Queen’s birthday on Monday, so I thought this post is rather timely. When Nadiya Hussain, the winner from the Great British Bake Off made her a cake for Her Majesty to cut, my heart only wished if I, little ol’ me, would ever have the same privilege  to make one too.

Then Cake Masters Magazine, in the UK had a call out for submissions on cake designs to celebrate the Queen’s birthday, and I jumped on the occasion. I may never make her a real cake since she’s kilometers away, but hey, I can make one as though I was asked to, right? And as though she’s made another official trip Down Under. This is probably one of the very few opportunities that I can do so, and off to the drawing board I go!

I thank my friends and family (yes my parents had some input) on the design that I decided on, and ta-daa!!!!

Yes, it’s very clean and simple. I was gonna go for the Queen’s favourite flowers, but Uncle Google didn’t seem to have an answer for that (or there are what people believe that she likes). The one thing I knew before getting on the Internet was she loves her corgis. Like, they’re fluffy. And ridiculously cute with their little bums. So I knew I wanted a feature on the cake with a corgi, so I thought why not have a corgi wear St Edward’s Crown? 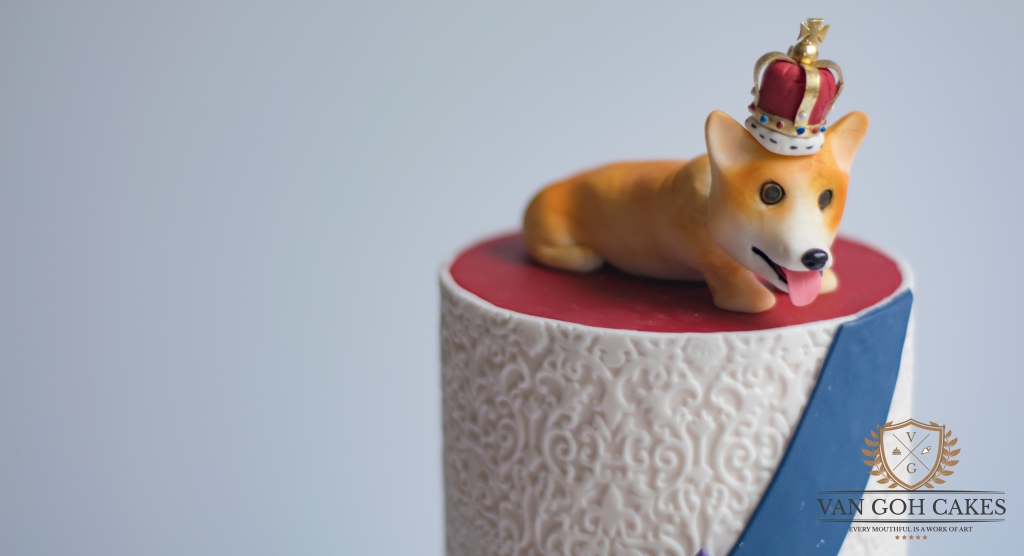 The next design element (thank you Robyn!) was the overall tiers. I picked the Queen’s gowns and dresses. The top tier was what the Queen wears to formal white-tie functions, simple, a lace dress that seem to catch the light a little, with the navy blue sash. I fashioned it as though it was an embossed design for the top tier, and I used an impression for it and added a pearl luster so it catches the light. I added the Queen’s royal cypher painted gold (which stands for Elizabeth II Regina) against a purple plaque which happens to be one of the colours on the jockeys who ride Her Majesty’s horses. 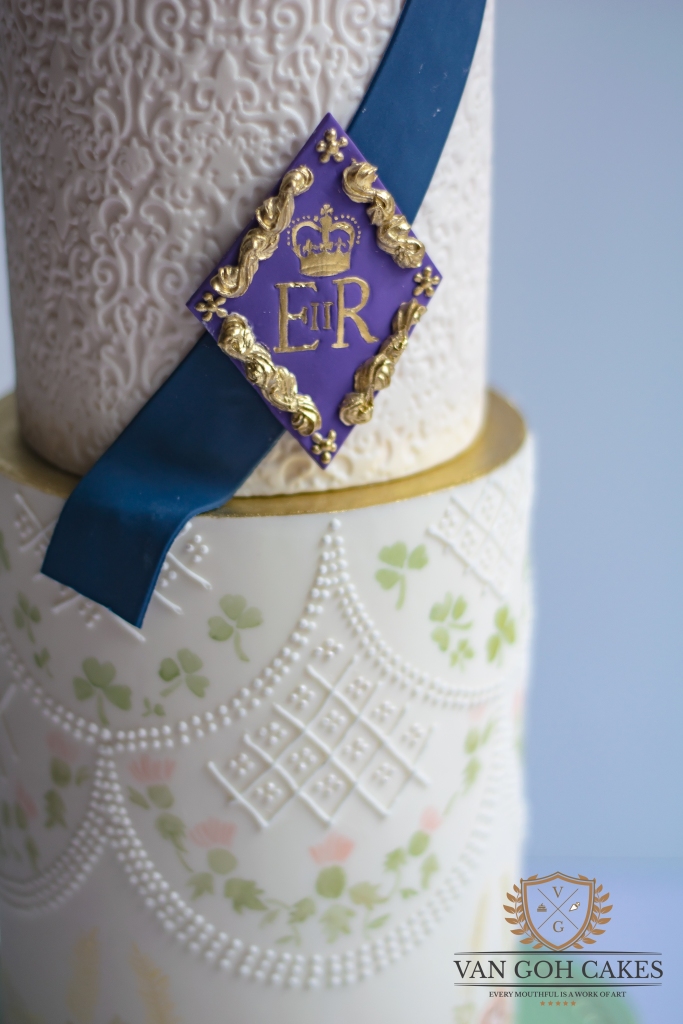 The bottom tier was designed based on Her Majesty’s coronation robes. This was a fantastic challenge on picking what elements of the robes to use. I later on decided to paint on the Tudor rose, the maple leaf, the fern, the wattle, and the four leaf clover. The dress itself was so ornate with gold and silver threads, with pearls and crystals arranged in a lattice design. I decided on a simpler approach and to have them piped instead.

I think this cake screams “Her Majesty!” quite fittingly, and I secretly hope deep inside, she will like it! Thank you once again to Cake Masters for allowing readers to make such a momentous celebration sweeter! It’s available in their June edition, together with some amazing tutorials. I may be biased, but I think it’s one of my favourite editions to date 🙂