Buttercream – one’s joy when eating cakes. When you eat cakes, you want to have an awesome, sickly sweet frosting, that goes oh so well with the cake its adorned in. One of my earlier pursuits in cake decorating was to do with making buttercream because not only did I want to learn how to pipe with them, but also to make them taste great at the same time.

I remember my earlier years as a young child when I’d look forward to my birthday cakes because mum would buy me a cake with beautifully piped frosting on the cake – at that time, I had no idea what type of buttercream it was. But it was oh so memorable, sadly I don’t think I have photos of it. When mum bakes cakes to eat at home, it often is just the cake and there’s no frosting/buttercream to it, because she believes the icing takes away the true flavour of the cake. Plus the fact that it is very sweet too which she is not a fan of.

When I started making cakes with buttercream, the one frosting that I usually made was the American-style buttercream that is often piped onto cupcakes, and some cakes. I only learned it’s known as the American buttercream recently as well, because I was soon to find out there’s other styles of buttercream as well 🙂

I found this buttercream to be sickly sweet, that sometimes I feel the sugar has seeped into my teeth and “rotted my teeth from the inside”. I also noticed many people would scrape it off (I had a lot of health conscious people around me in my lifetime, haha!) because they could not have it too sweet. The same applied to the cakes that I made when I did my course with Wilton. Not only did the buttercream had oodles of sweet offerings, but it also left with a greasy mouthfeel that I often disliked with this buttercream.

The American buttercream with vegetable shortening in place of butter had the advantage of sustaining warmer weathers and you won’t have a cake that’s “melting”, and you could get creative with piping as the vegetable shortening has a higher melting point and so it doesn’t melt in the piping bag as you laboriously embellish it with scrolls and leaf patterns. But it did not excite me as much as with butter-based buttercreams, and by popular demand, I’ve ditched it!

Shortening-based buttercreams do take colours well and stands up in the heat – but I’m not a big fan of its taste, adding butter flavour makes it taste very chemical-ish and loses the authenticity real buttercream offers gluttons like me!

My biggest shortcomings with buttercream is that I could never achieve the right colour when I want to decorate them. Butter is after all yellow, and so there is always the yellow tint that we have to deal with. Tried buttercream recipes that uses 50/50 of shortening and buttercream, to no success.

It was not until when I tried cupcakes from The Joy Cupcakes did I feel a revelation was coming. The buttercream piped onto the cupcakes was smooth, buttery and not too sweet, which was what I wanted. And hence the quest started in searching for a recipe for this buttercream. After several searches on the Internet, I was racking my brains and finally came across Rosie’s blog called Sweetapolita that introduced me to that long-dreamed for buttercream: Swiss Meringue Buttercream. 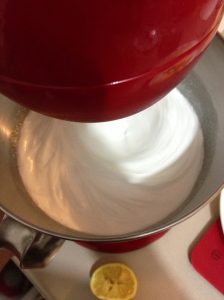 Whipping meringue – it may be the most relaxing part of the process, but gosh it makes the loudest noise in the house at high speed!

My first experiment with SMBC! How does it look?

Swiss Meringue Buttercream is a matter of whipping up a meringue, and adding butter to it to create this buttery and velvety buttercream. It has a smoother mouthfeel because the sugar is dissolved into the egg whites, and hence it’s not granular. Since that blog, and following that recipe and Martha Stewart’s recipe, I wanted to come up with a recipe that I can remember; I’m bad at remembering recipes, and I don’t have family recipes to follow, so I had to come up with a formula. Now, I have a foolproof formula: one part egg whites, two parts sugar (I use granulated sugar, you could always use caster sugar), and two parts butter. You could use more butter to have a more beautiful and luscious buttercream, but that will also mean it’ll be prone to melting due to butter’s lower melting point.

1. Wipe the bowl of an electric mixer with paper towel and lemon juice, to remove any trace of grease – I personally haven’t had issues when I skipped this step, but please do feel free to do so if you feel more comfortable doing so
2. Add egg whites and sugar, and simmer over a pot of water (not boiling), whisking constantly but gently, until temperature reaches 160°F/70°C, or if you don’t have a candy thermometer, until the sugar has completely dissolved and the egg whites are hot (or when the mixture does not feel granular in your hands)
3. With whisk attachment of mixer, begin to whip until the meringue is thick, glossy, and the bottom of the bowl feels neutral to the touch (this can take up to 10 minutes or so – if it’s still not cool, stop whipping and let it cool down at room temperature). Don’t add the butter until the bottom of the bowl feels neutral, and not warm.
3. Switch over to paddle attachment (I left the whisk attachment on with no problems) and, with mixer on low speed, add butter cubes, one at a time, until incorporated, and mix until it has reached a silky smooth texture (if curdles, keep mixing and it will come back to smooth).
-If mixture is too runny, refrigerate for about 15 minutes and continue mixing with paddle attachment until it comes together. Add vanilla and salt, continuing to beat on low speed until well combined. 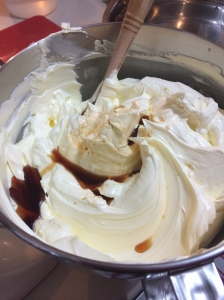 I hope you haven’t fell asleep reading this post, I hope you’ve found this post useful and I shall write more about it next time!